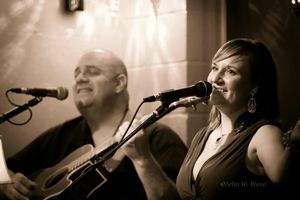 Erin Rossi and Sam Romano are a powerful, fun, and talented duo! They have known and worked with each other in various projects over 12 years. They pride themselves in playing PURE music, no backing tracks or preprogrammed songs. It’s a simple formula or recipe for success: Sam’s acoustic guitar + Erin and Sam’s diverse, unique, and heart felt vocals + a dash of percussion and maybe some scatting in place of a missing instrument, depending on that particular song, this all equals the Rossi & Romano sound! From Adele, to Janis Joplin or Van Morrison to Led Zeppelin, they can play it all! Sam Romano has been in the Cleveland Music scene for over 25 years. He plays the guitar, drums, key board, and bass. His vocals are truly amazing! He plays the drums and sings in the “Jerry Bruno Orchestra” and “The Jerry Bruno A Band”. He plays the acoustic guitar and sings in the amazing trio of “My Three Sons” with Dwayne Dickman and Ross Safos. He writes his own music as well. Sam is just an overall true talent! Erin Rossi has been singing in the Cleveland area for over 20 years. She has been in various wedding and all occasion bands under Jerry Bruno Productions since 1999. She is involved as an active member in the Cleveland Blues Society. She has sung the National Anthem for various Cleveland Professional Sporting events. While she still enjoys performing in bands, the acoustic route is something new and different. Her vocal style can be described as bluesy, jazzy, soulful and sultry.