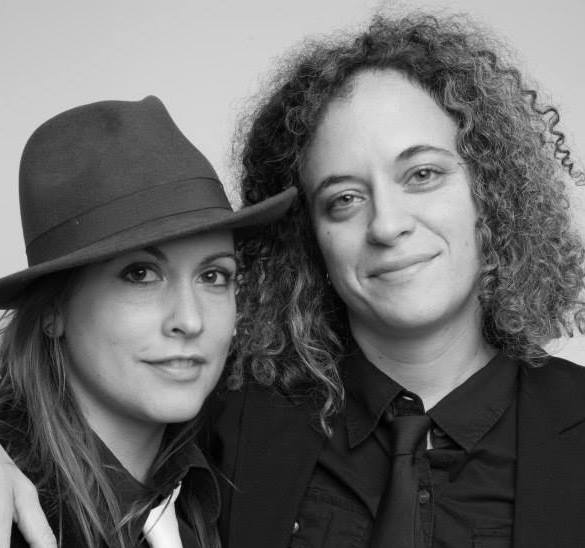 The Babies in Black is a female duo consisting of guitar, upright bass, and two harmonizing vocals. “Babies in Black” is singer-songwriter Rachel Roberts, and Dr. Beth Hiser (music professor at Baldwin Wallace). The duo’s material is mostly 1955-1965 rockabilly and pop songs, with originals resembling music from that era spiced through their set. The tight vocal harmonies carry Everly Brothers, Beatles, Leslie Gore, and many other 50s and 60s groups. A professional background on both performers: Rachel Roberts is from the underground rock factory of Akron, OH. has toured the country performing her original material, from Portland, ME to San Diego, CA. She has played with and/or opened for several performers, including Chrissy Hynde of the Pretenders, Greg Kihn, Joseph Arthur, and Rusted Root. She has released 4 albums and is currently working on a fifth with producers in Chicago. Roberts is the bandleader, songwriter, guitarist and vocalist for Rachel’s Secret Stache, Sexis Sixes, and Rachel Roberts and The Ruthless. She has played more than 1,000 shows at over 200 venues nation wide. Dr. Beth Hiser is multi-talented. She plays violin, piano, bari sax, and upright bass, and has collaborated with several bands in the past 10 years. Hiser played with an Afro-pop band in Austin, TX, and when she moved to Cleveland in 2006, she continued to write violin and piano parts for several recording artists in the area. Hiser teaches music theory to young aspiring musicians at Baldwin Wallace, and there she met the professor led band, Front Porch. Front Porch plays old-timey mountain bluegrass music, with Beth on violin and upright bass. They’ve played all over Ohio. Babies in Black formed 6 months ago, but since have played shows in Austin, TX, Cleveland, Akron, and Kent. They’ve been hired for several private parties already, and have recorded a demo. Babies in Black plans to record an album this year and go on a short national tour this summer.