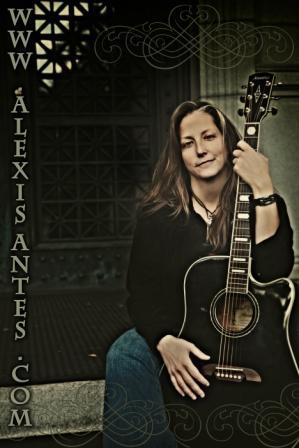 Singer/songwriter Alexis Antes has teamed up with platinum record producer/engineer Jim Wirt (Fiona Apple, Brian Setzer, Incubus, Hoobastank) and Superior Sound Recording Studios for her new recording project titled “13”. Alexis was a founding member of popular and influential ‘90s Cleveland-based folk-pop group, Odd Girl Out, and continued on as a solo artist, releasing two full-length recordings of her original work. The highly anticipated 13 is Alexis’ third solo album and was released to a sold-out crowd at Music Box Supper Club in Cleveland, OH on July 13, 2017.
Artist biography:
Alexis Antes is a well-established name in the Ohio Region. Many years of professional performing, touring and record making have given her a great platform to jump from. Add that with some of the renowned artists she has performed with; Sarah McLachlan, Paula Cole, Sheryl Crow, James Taylor, Melissa Etheridge, Jewel, Joan Armatrading, and Dan Fogelberg, and you’ve got a spring board to boot.
Alexis has been absorbing and performing music all her life. An environment of creativity surrounded her as she grew up with her mother, Bobbie Antes, an accomplished singer/songwriter and musician. Her father, Scott Antes, was also influential as a songwriter and musical instrument builder. The two owned and operated a coffeehouse in Lakewood, Ohio, in the late ‘70s and this provided the perfect environment for Alexis to soak up all that the local Cleveland folk talent had to offer.
By the age of twelve, Alexis had taught herself to play the guitar. At eighteen, she was the youngest founding member of the popular and influential Cleveland-based folk-pop group, Odd Girl Out. After OGO split, Alexis found her own voice and a new path as a writer and performer of her own songs. It is the personal nature of Alexis’ songs on her debut recording, Stronger, and her follow-up release, All Come Down that strikes a chord with her fans. Cleveland’s Scene Magazine said of her work, “Listeners are treated to a lone voice in the wilderness singing introspective, soul-searching ballads about disillusionment, heartache and growth — songs that would not be out of place on a disc by Paula Cole”.
The music, the mood, the strength and the sensitivity of Alexis Antes shows us a blossoming artist firmly in control of her own destiny, comfortable in the spotlight at center stage and far from finished with writing and evolving. In fact, her new material is yet a new chapter, and a fresh look at change, being put to music.